Hi friends!  We got through last weekend's blizzard fine except for a leak in a roof vent.  Fortunately, the roofer came out right away and sealed things.  Hopefully, that will take care of it.

With Valentine's Day fast approaching, I have made several tags.  Today, I will share two of them with you. 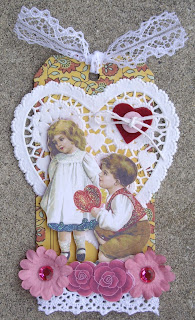 First up is a tag I made with several diecuts from an older line of K&Co.  The base is a premade tag that I have had in my stash forever.  I simply attached a heart doily to the tag.  A piece of crochet lace was placed at the bottom.  The diecuts were adhered with some foam squares.  A couple of paper flowers were added with rhinestones.  A button with a twine bow was placed on a felt heart and added to the tag.  A piece of lace trim was tied to the top of the tag.

My next tag features a fabric image from Crafty Secrets.  A premade tag was covered with pretty paper from Recollections.  I added a cream colored piece of paper from the same paper pad with the edge shape made from a Martha Stewart doily punch.  Next came the heart doily and then the fabric image added with foam squares for dimension.  Various pieces of trim and flowers from my stash complete the tag. 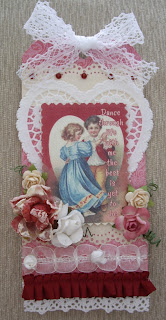 I tend to save all different odds and ends which I used to put this tag together.  It feels good to use up some of those things!

Next time, I'll share a couple more Valentine tags.  It's hard to believe February arrives tomorrow!  I'm enjoying the coziness of the winter season even though some of it has been unusually mild.  Thanks for taking the time to stop by.  I look forward to reading your sweet comments.  Have a wonderful week!
Posted by Patty O'Malley at 9:06 AM 14 comments:

Please read the following if you haven't already seen this elsewhere.  Scroll down to my regular blog post afterwards.  Thank you.

As some of you probably know, some of the things I love are angels, fairies, and snow.  I've had this Penny Black stamp for awhile and finally decided to play with my Copics using this image. 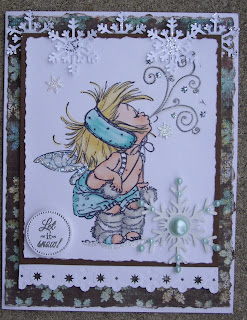 Isn't this little fairy the cutest thing?  My Copic coloring skills aren't the greatest, but I had a lot of fun coloring this image.  I used Stickles on it for added sparkle.  The image was mounted onto brown cardstock and adhered with foam tape to the glittered MME snowflake paper.  The snowflakes across the top were made with a Martha Stewart punch and highlighted with Stickles.  The punched and embossed snowflake border below the image is also from Martha Stewart.  The large snowflake is actually a brad from Spare Parts.  I embossed the Let it Snow! sentiment with silver embossing powder and cut it out with a circular punch.  The tiny snowflake stickers are from Martha Stewart.

This card actually came together rather quickly.  I definitely am going to start using my stamps and Copics more often.

Finally, my wish for snow was granted and was it ever!  We ended up having a blizzard Friday night through most of Saturday.  I think this is probably the most beautiful snowfall I've seen in awhile especially last night with the lights shining on it.  Here is a photo I took this morning as the sun is up and starting to melt away what fell. 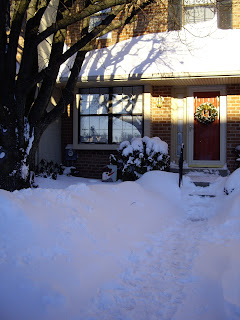 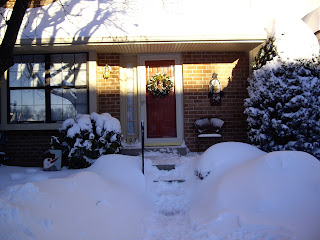 Yes, I was one happy girl this weekend!  I also got to spend a nice amount of time crafting while making homemade chicken noodle soup and a crumb cake.  It really was nice being indoors with my family and enjoying a relaxing few days.  Of course, digging out began today!

Thank you so much for stopping by!  I appreciate each comment you leave.  Have a wonderful week ahead.  For those in the path of this storm, stay safe and warm.
Posted by Patty O'Malley at 11:15 AM 8 comments:

Except for a bit of flurries, we still haven't had any snow here.  Part of that is due to the unseasonably mild temperatures we have had.  However, winter is trying to make an appearance as the temperatures are finally dipping.  We are supposed to have snow flurries this afternoon but not any accumulation.  I am trying to be patient as I do love snow!

That being said, I created this tag using Pion Design's Days of Winter papers.  I love these papers--plus I get a bit of snow in my life!  If you click on the photo, you can see the details better. 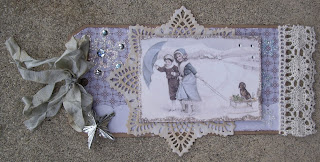 Just look at that sweet scene!  I began by layering some leftover scraps of paper onto a kraft tag.  The Prima doily was given a coat of white Wink of Stella.  A bit of crochet trim was placed at the bottom (or side, as I decided to make the scene on a side angle).  Distress Glitter in Pumice Stone was placed around the image and mounted to the tag on a piece of cardboard.  A couple of rhinestones were added to the upper right corner of the image.  Snowflake stickers by Jolee's were added for some more sparkle.  A seam binding bow and star charm finishes it off.

Well, that it for me today.  I wasn't able to get in much craft time this past week, so I'm hoping to catch up a little on it today.  Thank you so much for taking the time to visit my blog.  I do appreciate your sweet comments.  Hope you have a wonderful week ahead!

Hi everyone!  A dear friend recently gifted me with some papers from an older Graphic 45 line called Christmas Past.  While the theme is geared towards Christmas, I think it is versatile enough to use for other things as well.  With that in mind, I created this Angel Tag. 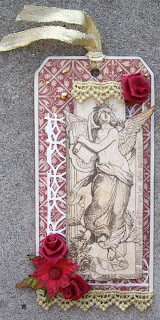 To see the details better, just click on the photo.  I began by adhering a piece of the pattern paper to a premade tag and inked the edges.  The angel was fussy cut from another sheet of the paper and placed on the tag with foam squares.  Underneath the angel is a Tim Holtz Thinlits die shape.  A piece of gold and cream lace trim, I believe from Prima, is attached at the bottom of the tag and also to the top of the angel image.  The roses are from my stash, but the poinsettia and leaf are Prima.  A few gold flat back beads were placed at the top.  The tie is gold metallic ribbon from my stash.  I added a touch of Stickles to the angel's wings but it is a bit difficult to see in the photo.

What are you working on now?  I pulled out some stamps and my Copics this past week and tried my hand at a bit of coloring.  I need to do more of this as I do enjoy it.

Wishing you a wonderful week ahead.  Thanks for taking the time to visit my blog.  I appreciate so  much the kind comments you leave.
Posted by Patty O'Malley at 8:56 AM 14 comments:

Hi friends.  To mark the New Year 2016, I decided to alter a mini canvas that's been in my stash for awhile.  When I saw the sweet Pion Design image of the child with the number 1, I thought this would be perfect as a focus on the canvas and to mark the New Year. 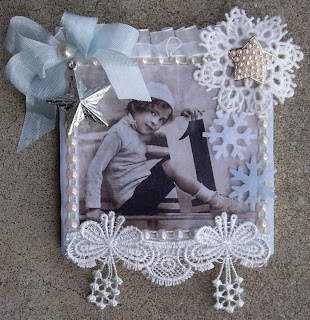 The canvas measures 4x4 inches.  The image was adhered to the canvas with Glue N Seal.  The pretty lace and ribbon trim, doily, pearl star, and pearl border strip were gifts to me.  The silver star charm was attached to the blue seam binding bow and accented with a Recollections pearl.  The felt snowflakes are also from Recollections.

Once the glue dried for the image, everything came together rather quickly.  I enjoyed making this little canvas so much and hope you like it.

After a warm Christmas, winter has finally made an appearance here with cold, but seasonable, temperatures.  However, no snow is forecasted as of yet--maybe snow flurries tomorrow.  Today is a perfect day to put on a large pot of homemade chicken noodle soup with some warm, crusty bread which is my plan for today.  I hope your new year is off to a good start.  I just found out I won a gift certificate to Heartfelt Creations and am thrilled!  It's back to work for me tomorrow after a nice long break for the holiday.

Thank you so much for taking the time to stop by.  I appreciate all your kind comments.  Wishing everyone good health and happiness for the new year.
Posted by Patty O'Malley at 8:48 AM 13 comments: